A Trompe L'oeil mural is very personal and has a 'small is beautiful' intimacy about it. It feeds an almost universal desire to escape into a world where fantasy invades the senses. It needs very little space and, compared to a large wall painting, is more affordable. Trompe l'oeil murals are also less intimidating and obtrusive to live with than a vast mural. On the other hand, by its nature, it tends to be a contrived rather than a passionate art form. The best trompe l'oeil murals go beyond visual deception and they unfold their secrets slowly as the inner eye adjusts from surprise to confusion. This is usually followed by a disappointing adjustment to reality-the grapes are not real after all-and, finally, delight at the skill of this visual confidence trick. Overt the last decades most contemporary Trompe L'oeil mural artists were producing their work for commercial art companies rather than focusing on their own art. There are some exemptions however.  One of the modern masters of the art is the American Christian Thee. His world is a magical place both in the literal and the metaphorical sense. Thee is a prize-winning magician of the rabbit-out-of-a-hat variety, a stage designer, as well as a renowned exponent of trompe l'oeil. This ebullient and enthusiastic man imbues his audience with a sense of being caught up in his fantasies. The title says that all his murals stem from his interest in designing for the theatre. Many of his smaller Trompe l'oeil works are constructions-painted screens and shutters, window frames surrounding a mysterious figure or an intricate scene, painted on gessoed wood. Gesso is a fine plaster, bound with glue size, which builds up a hard surface on which the paint is then applied. Thee has always had the ambition to incorporate magic in a painting. One of his most effective works is now owned by the Flint Institute of Art, Michigan. He calls it 'magic realism'. People looking at it revert to being children because they simply cannot figure out how it works. At first, they see a painted window covered by a pair of real shutters which are fixed to a wooden panel. When the shutters are pulled back, they reveal a predatory cat on a windowsill eyeing a caged canary. When the shutters are closed and reopened, the canary and the cat have changed places. The castles in the sky have metamorphosed into clouds and the artist's name, or cartellino, which had been partly torn away, has been reinstated. The device is cleverly constructed with electronic magnets on the surface of one shutter and the canvas, but it would give the game away to reveal the complicated trickery involved and would spoil the illusion for future visitors to the Institute. This small trompe l'oeil is an ingenious combination of illusion, theatre, magic and humour, and is typical of the artist, who says, 'I like to reward the onlooker who looks carefully by hiding small treasures in my murals.' Although Trompe l'oeil has been practised since the days of the ancient Greeks, it is not an easy technique to master. It must be life-size if it is to fool the eye and requires infinite skill and mastery of perspective to achieve a realistic three-dimensional effect. There is no such thing as a 'modern' Trompe l'oeil, even though the composition can be treated in a contemporary way. The artist must tempt you to reach out and pluck a leatherbound book off a shelf, touch a silken Persian down an imaginary corridor through seemingly endless doors and out into a carpet lying on the floor or fantasy landscape. The trend has been evolving at a steady pace for the past twenty years in both England and America and is more popular today than ever. The cabinet of curiosities, niches and simulated bookcases laden with dusty tomes, which were popular in seventeenth-century Europe, still inspire muralists. But the sombre skulls, bottled potions and feathered quills such as those in the symbolic Vanitas still-life paintings of the seventeenth-century Dutch artist Cornelius Gijsbrechts have been exchanged for more lighthearted objects today. Tony Raymond has a passion for eighteenth-century paintings, style and objects d'art. He gives this enthusiasm full rein in a small shop in the heart of London called Dragons, a treasure trove of unusual paraphernalia. His painted cupboard is full of exquisite eighteenth-century objects and personal mementoes, evoking the treasures attributed to Domenico Remps in his famous Cabinet of Curiosities, painted in the late seventeenth century (Opificio delle Pietre Dure, Florence). 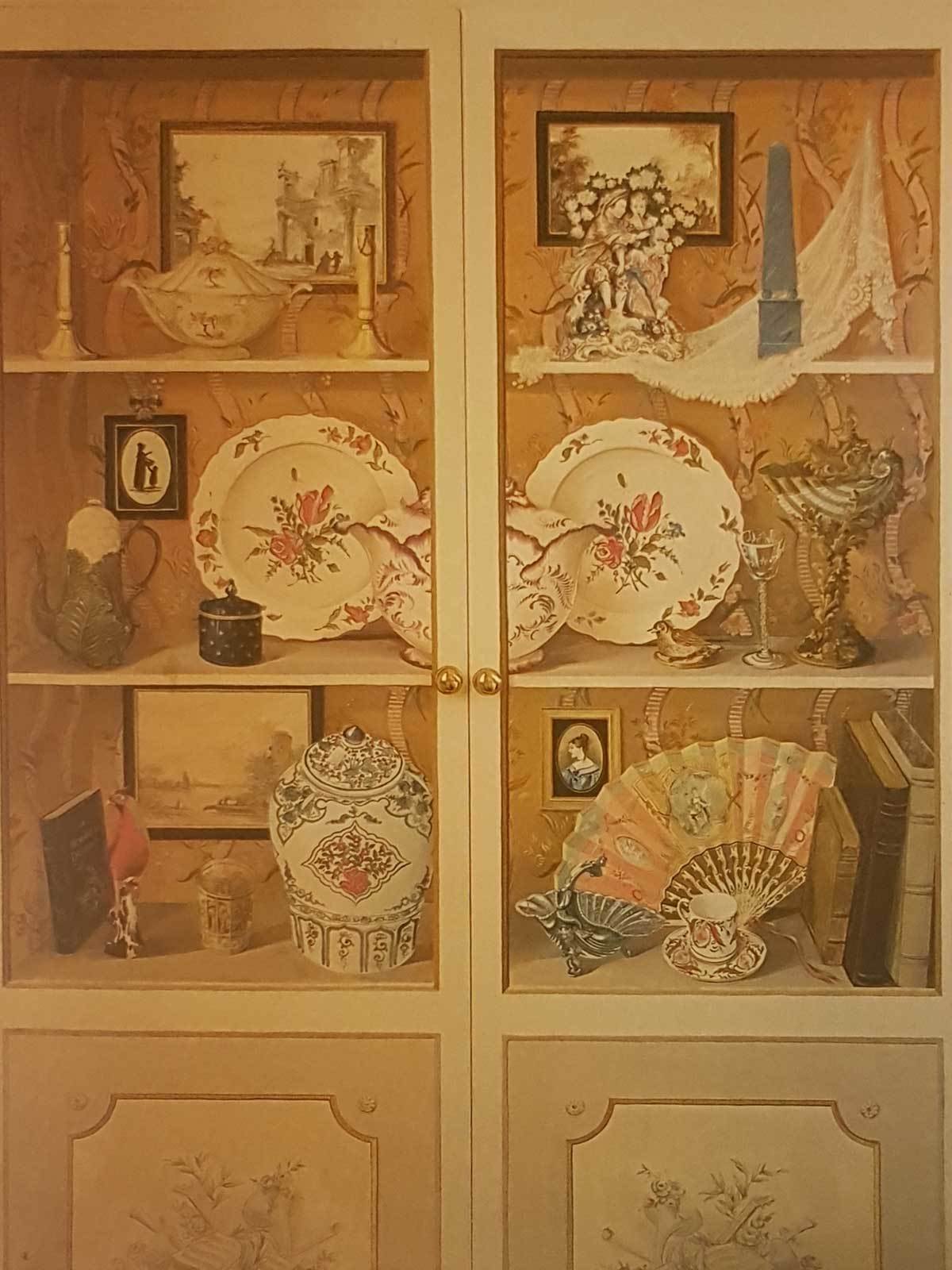 In the contemporary version, two faience plates delicately patterned with a rose, beetle and tulip stand against a background of Spitalfields silk. A Chinese temple jar and a Chelsea group of shepherd and shepherdess can be seen, resting on a piece of Brussels lace. The early Staffordshire cauliflower coffee pot and pastel-coloured fan are gentle reminders of the finer things in life. Tucked away in the corner is a Book of Dragons in honour of the shop. Raymond comments: 'A mural is an individual's decoration. Few people would commission a painting. Instead, they would buy one. But having something close to the person's ideas must be part of the equation for their current popularity. Simulated shelves can be just as effective as painted cupboards. The contents, along with the titles of the books, provide revealing clues as to the personality of their owner. Besides being easy on the eye, painted shelves full of leatherbound tomes are warm and cosy. For the apartment belonging to his clients Mr and Mrs Samucl P. Reeds, the American decorator and muralist Richard Neas has created an illusionary trompe l'oeil library wall, full of the familiar vocabulary-leatherbound books, personal mementoes and photographs.